Here’s what you need to know:

I.C.U. beds across the United States are filling up. In states like Louisiana, they’re already at or above capacity.Credit…Emily Kask for The New York Times

For the first time since February, the United States is averaging more than 100,000 new coronavirus cases a day, marking a resurgence that is hitting especially hard in states where large portions of the population remain unvaccinated.

Reported cases dropped this spring as the rollout of the vaccines picked up speed. A cautious optimism returned, and the summer was supposed to mark a joyous rebound to normalcy.

Over the past week, however, the average number of cases doubled from two weeks ago, according to a New York Times database. In the same period, deaths have nearly doubled to 516 a day.

The surge is tied to the highly contagious Delta variant of the virus. Vaccines provide a high degree of protection against the variant, which was first detected in India, but only half of the U.S. population is fully vaccinated.

Dr. Rochelle P. Walensky, the director of the Centers for Disease Control and Prevention, has described the current stage as a “pandemic of the unvaccinated.”

The rise in cases has reignited debates around mandates for masks and vaccinations. In a reversal, Gov. Asa Hutchinson of Arkansas, a Republican, said on Sunday that a state law banning mask mandates had been a mistake.

“It was an error to sign that law,” he said on the CBS program “Face the Nation.” “I admit that.”

Mr. Hutchinson signed the bill in April, but “facts change,” he said, “and leaders have to adjust to the new facts and the reality of what you have to deal with.”

Randi Weingarten, the head of the powerful American Federation of Teachers, also urged a reversal of her union’s position against vaccine mandates. The rising caseloads are a “public health crisis,” she said Sunday on the NBC program “Meet the Press.”

Ms. Weingarten recently traveled to Missouri and Florida, two of the hardest-hit states. “I do think that the circumstances have changed and that vaccination is a community responsibility,” she said.

She said that Gov. Greg Abbott of Texas and Gov. Ron DeSantis of Florida, two of the most powerful opponents of mask mandateshad spread disinformation that is “hurting people in terms of their public health.”

The charge against Mr. Abbott was echoed earlier in the weekend, when officials in Austin, Texas, warned that the situation was desperate.

“We are in the single digits of I.C.U. beds available,” said Bryce Bencivengo, a spokesman for Austin’s Office of Homeland Security and Emergency Management. He said patients in emergency rooms were being forced to wait for space.

The mayor of Austin, Steve Adler, said that the crisis could have been avoided if Mr. Abbott had not barred local government officials from issuing mandates on masking.

The nation’s top infectious disease doctor, Dr. Anthony S. Fauci said on “Meet the Press” that vaccine mandates for adults were necessary to give children who were not yet eligible for inoculation a “shield of vaccinated people.” The United States has yet to approve a vaccine for children under 12.

Pediatric cases of Covid are still a fraction compared with adults, but they have risen sharply, just as schools are preparing to reopen.

No major school districts have abandoned plans to reopen, but Dr. Fauci was blunt in his assessment. “You’ve got to protect the children,” he said. 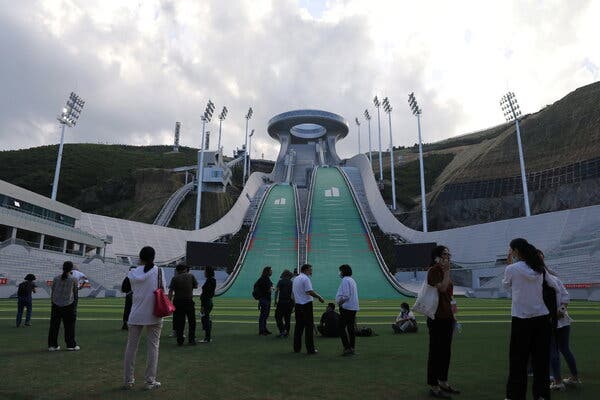 Journalists at the National Ski Jumping Center in Zhangjiakou, China, during an organized trip last month to venues for the 2022 Winter Olympics.Credit…Tingshu Wang/Reuters

Guards in biohazard suits, ready to stop anyone from leaving. Athletes giving interviews from behind plastic walls, speaking through microphones. All-day armpit thermometers, with tiny transmitters to sound the alarm should someone develop a fever.

With the Winter Olympics in Beijing just six months away, the Chinese authorities are planning elaborate precautions against Covid-19. The measures are expected to go far beyond those taken at the Tokyo Games, which ended Sunday with more than 400 reported cases.

China has made clear that containing the virus is its top priority. On July 30, as case numbers were climbing in Tokyo, Beijing organizers announced plans to redesign their 39 Olympic venues. Workers are now dividing passageways lengthwise and installing new toilets and other facilities.

The design changes are supposed to ensure that athletes have practically no contact with referees, spectators or journalists, groups that will be kept separate from one another as well. The goal is to minimize cross-infection.

China has taken a zero-tolerance approach to the virus since bringing it largely under control last year. The borders are almost completely sealed, and the authoritarian government has quashed sporadic outbreaks by locking down entire cities and mobilizing large numbers of people to test and trace infections. Scattered outbreaks of the Delta variant in recent days have officials even more concerned than usual.

In Tokyo, the authorities barred almost all Olympic spectators and had participants from overseas stay in designated hotels and ride special buses to events. But enforcement was haphazard, and news outlets found many violations.

China plans a stricter approach. For the Winter Games, to be held from Feb. 4 to Feb. 20, the authorities intend to wall off China’s 1.4 billion people from essentially all athletes, judges, drivers, guides, journalists and others associated with the event.

In other developments around the world: 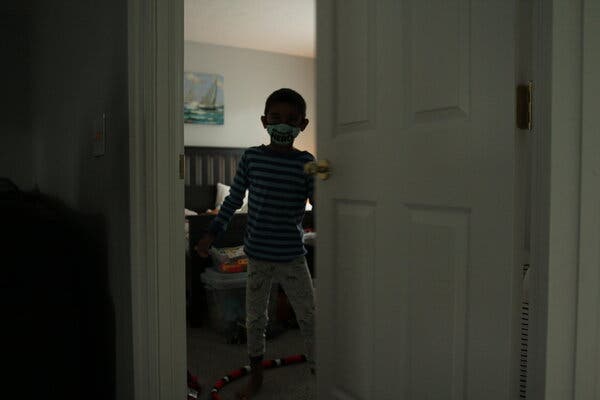 Ethan Chandra, 7, has heart and lung defects that make him especially vulnerable to Covid-19. His family in Lehi, Utah, has spent much of the past year and a half at home to keep him safe.Credit…Alison Chandra

On the July evening that he was diagnosed with Covid-19, 7-year-old Ethan Chandra lay in bed with a high fever next to his mother, holding her hand and whispering, “I’m scared I’m going to die.”

His mother, Alison Chandra, didn’t know what to say. Although a vast majority of children his age who test positive for the virus either don’t have symptoms or fully recover, Ethan has heart and lung defects that make him especially vulnerable.

His family in Lehi, Utah, has spent much of the past year and a half at home to keep him safe. In November, Ethan’s parents tested positive for the virus after his father briefly returned to work in person, but they managed to avoid infecting their children. But recently, Ethan got Covid-19 anyway.

The Delta variant has led to a surge in cases and hospitalizations across the country, leaving families with high-risk children who are not eligible to be vaccinated especially concerned. A growing number of parents have shared their stories online, accompanied with desperate pleas for people to get inoculated.

Many parents say they are angry and exhausted from trying to keep their children safe while balancing the emotional trauma of more than a year of isolation.

Case counts among U.S. children have increased over the summer. In the last week of July, the number of new cases doubled to 71,726 from 38,654 the previous week, according to data from the American Academy of Pediatrics.

There is no estimate for the number of American children who are at higher risk from the virus because of medical conditions, said Dr. Dennis Z. Kuo, a former chairman of the American Academy of Pediatrics Council on Children With Disabilities. But he estimates about 19 percent of children have special health care needs, and 1 percent have severe medical complications.

Within those groups, he said, children with heart, lung or immune system disorders are especially at risk from the virus, as well as those with intellectual or developmental disabilities. 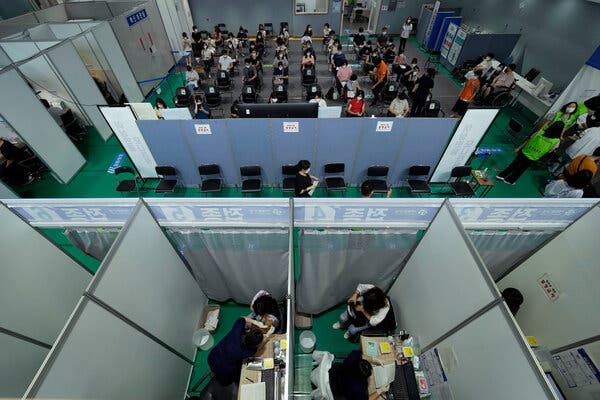 South Korea on Monday will open its vaccination booking system to adults ages 18 to 49, a major step forward in its troubled vaccine drive as it struggles to contain its worst outbreak of the pandemic.

Inoculations for this age group, which encompasses about 16 million people, will take place through Sept. 30, and recipients will have a choice of the Pfizer or Moderna vaccines. Previously, the only way people in this age group could get inoculated was to sign up for leftover vaccine doses as the government focused on immunizing older people.

South Korea’s vaccination program, which began in February, has been hampered by supply shortages and technical issues. When the booking system was opened to adults in their 50s in July, as many as 10 million people logged on to the government website simultaneously, crashing the system.

“Registering as fast as possible is my first priority,” said Shin Minseo, an office worker in Seoul, the capital. “But if the age range is 18 to 49, I’m worried about the sheer number of people applying and the site crashing.”

To prevent that from happening, the government said that newly eligible people would be allowed to register for appointments only on designated days based on their birth dates.

About 40 percent of South Korea’s population has received at least one shot of a vaccine, according to a New York Times database, making it among the least vaccinated in the Group of 20 industrialized economies. Officials say their goal is for 70 percent of the population, or 36 million people, to receive at least one shot by the end of September.

South Koreans have become more anxious for shots as the country faces a fourth wave of infections driven by the Delta variant. The capital region, where the cases have been concentrated, is under the most restrictive level of social distancing regulations, with gatherings of more than two people prohibited after 6 p.m. Last week the government said those restrictions would be extended for two weeks through Aug. 22. 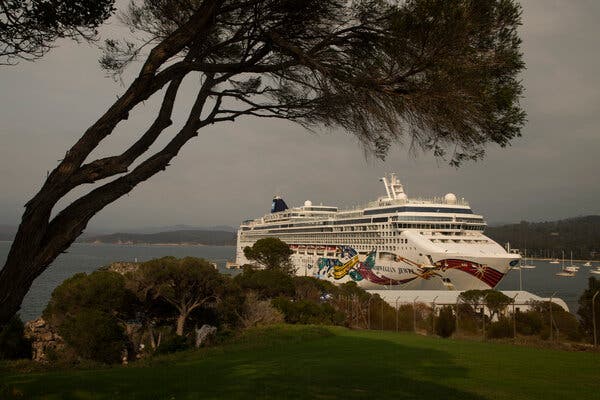 A federal judge on Sunday granted Norwegian Cruise Line’s request for a preliminary injunction, temporarily allowing the company to require proof of vaccination from passengers despite a Florida law that bans businesses from doing so.

The ruling is likely to draw backlash from Gov. Ron DeSantis of Florida, who in May signed a state law that set fines for businesses requiring customers to provide proof of vaccination.

The governor’s office did not immediately respond to a request for comment on Sunday night. Norwegian’s next cruise ship to sail from Florida is set for Aug. 15, out of Miami.

In a statement on Sunday, Norwegian Cruise Line Holdings said the ruling would allow it to “operate in the safest way possible.”

“We welcome today’s ruling that allows us to sail with 100 percent fully vaccinated guests and crew, which we believe is the safest and most prudent way to resume cruise operations amid this global pandemic,” said Frank Del Rio, the president and chief executive.

In the order, Judge Kathleen Williams of United States District Court noted that scientific research shows that “cruise lines are hotbeds for Covid-19 transmission.” She also cited the potential for the cruise line to suffer financially if Norwegian was forced to cancel trips or reroute around Florida.

Judge Williams wrote that the “defendant fails to articulate or provide any evidence of harms that the state would suffer if an injunction was entered,” and added that Norwegian “has demonstrated that public health will be jeopardized if it is required to suspend its vaccination requirement.”

A preliminary injunction generally will stay in effect until there is a final ruling in a lawsuit.

The judge’s order came as coronavirus cases have risen sharply in Florida. Over the past two weeks, cases have increased 84 percent and hospitalizations have doubled, according to New York Times data.