Asked what will be done to stop the Taliban flooding the streets of the UK with heroin, Johnson says the export of heroin from Afghanistan has been increasing in recent years. He says the UK will insist to the Taliban that Afghanistan should not become a narco state, but he says it is for the National Crime Agency to fight crime in this country.

Theresa May, the former prime minister, asked Johnson if he accepted that the fall of Kabul increased the terrorist threat to the UK. Johnson said he did not yet have any specific information to show that that was the case. He said the government would spend what was necessary on counter terrorism.

This is from the Telegraph’s Lucy Fisher.

Theresa May says: “As a result of Nato forces withdrawing from Afghanistan, the terrorist threat has increased.”

She calls for counter terror to be given “necessary support” to keep UK safe.

PM says: “We have no direct info as yet of any increase to the threat yet.”

Ian Blackford, the SNP leader at Westminister, says normally a cabinet minister gets sent out to cover for the PM. But this afternoon Boris Johnson is here to cover for Dominic Raab, the foreign secretary.

He asks why the Foreign Office ignored so many emails sent by MPs about Afghans hoping to escape to the UK. The Foreign Office said it got more emails than during Covid, he says. But he says there was a difference; people did not know Covid was going to happen, but they could predict this.

Johnson says every email sent by an MP will be answered.

UPDATE: In response to a question from Blackford about how many Afghans eligible for relocation to the UK under the Afghan Relocations and Assistance Policy (Arap) scheme were still in the country, Johnson replied:

As for the question of how many Arap candidates are remaining I can tell him that the total number is 311, of which 192 responded to the calls that were put out and, I repeat, we will do absolutely everything we can to ensure that those people get the safe passage that they deserve.

In his response to Starmer, Johnson said the Labour leader was wrong to brand the evacuation a failure. He said the military evacuated twice as many people as they originally expected.

He also accused Starmer of not attending the first of the three Commons statements he has given to MPs on Afghanistan.

Starmer says Johnson was ‘incapable of international leadership’ over Afghanistan

Sir Keir Starmer is responding to Johnson on behalf of Labour.

He says those involved in Operation Pitting (the evacuation) were “the best of us” and he thanks them.

But they were let down by lack of leadership, he says. The government’s assumption that the Taliban had no path to victory was “complacent and wrong”.

The government’s strategic defence review published earlier this year did not even mention the Taliban or Nato’s withdrawal from Afghanistan, he says.

He says many Afghans eligible for help under the Afghan relocation and assistance policy (Arap) scheme were not able to get out, even though they applied in good time. He goes on:

We have a prime minister incapable of international leadership, just when we need it most.

Political leadership was “missing in action”, he says.

History will tell the tale of Operation Pitting as one of immense bravery. We are proud of all those who contributed, their story made even more remarkable by the fact whilst they were saving lives our political leadership was missing in action.

Johnson says Saturday will mark the 20th anniversary of 9/11.

If anyone says Britain achieved nothing in Afghanistan, people should tell them that the armed forces, and their allies enabled 3.6 million girls to go to school in the country, he says. They also protected the UK from al-Qaida, and organised the biggest humanitarian airlift in recent history, he says.

Johnson says the government will let up to 20,000 Afghans relocate in the UK.

As well as people who worked for the military, the scheme will also cover others at risk from the Taliban, including people who campaigned for democracy and human rights, or who are at risk because of their gender or sexuality or religion, he says.

Boris Johnson starts by saying the biggest and fastest emergency evacuation in recent history is over. He says 15,000 people were brought to safety in the UK.

He says two British nationals and 13 Americans were among the dead from the “contemptible” terrorist attack at the airport.

He pays tribute to the military personnel involved in the evacuation, and to those who served in Afghanistan generally over the past 20 years. He says they contributed to keeping the UK safe from terrorist attack.

He says the government is spending another £3m on mental health support for veterans, and is giving £5m more to military charities.

The government is still committed to helping Afghans who worked for the British, and it is working with partners in the region to try to secure them safe passage out of Afghanistan. The government will do all it can to help them reach safety, he says.

Boris Johnson is due to deliver his Commons statement on Afghanistan within the next few minutes.

Here is our report from last time he addressed MPs on this matter, when parliament was recalled in August after the fall of Kabul.

The Resolution Foundation thinktank has produced a typically incisive briefing paper (pdf) on the key policy choices facing the chancellor this autumn. Like the IFS (see 11.30am), it says that a national insurance rise and an income tax rise would both be progressive means of funding social care, but that putting up income tax would be more progressive. This chart illustrates the point. 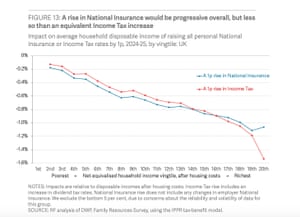 At the No 10 lobby briefing the PM’s spokesman said that figures are available showing that the shortage of HGV drivers is a Europe-wide problem, and not just a UK-specific consequence of Brexit. (See 1.35pm.) The pro-Brexit Guido Fawkes website has posted this link on Twitter to support No 10’s point.

Browsing through Global Cold Chain News, as you do, it seems the lorry driver shortage is pan-European… https://t.co/8EVSQfIre3 pic.twitter.com/i7xZRDyThM

Robert Halfon, the Conservative MP for Harlow who chairs the Commons education committee, told Times Radio that he would vote against the proposed increase in national insurance to fund social care unless measures were taken to exempt people on lower incomes from the new tax. He suggested it should only apply to people earning more than around £40,000 a year.

Coronavirus rules are set to be renewed for another six months as No 10 admitted cases are likely to increase sharply in England because children are returning to school, my colleague Jessica Elgot reports.

Sir Charles Walker, the vice-chairman of the Conservative backbench 1922 Committee, told the World at One that Rishi Sunak, the chancellor, would hear a lot of concern from MPs about the social care plan when he addressed the committee tonight. Walker, a lockdown sceptic, told the programme:

There’s going to be a lot of concern and we are going to reflect the concern of our constituents. I’m not surprised the government is running out of money because it has just spent £430bn shutting down the economy.

Walker said that, although he would love to be able to leave his assets to his children, he believed that if he needed money to pay for social care in his old age, those assets should be used to pay for it. He also said that he would like to see the emergence of a market that would allow him to buy insurance to cap his liability for social care costs.

(The original Andrew Dilnot plans for social care unveiled 10 years ago, which involved a cap on the amount that any individual would have to pay for care and which are the basis for the plan expected to be announced tomorrow, was meant to provide the industry with an incentive to start offering social care insurance.)

Although Walker said he hoped the government would come up with “a more sensible solution”, he also said he would not vote against the plan because he accepted the government needed to raise money.

Here are the main lines from this morning’s Downing Street lobby briefing.

It remains our intention to bring in the requirement for the Covid pass by the end of September for nightclubs and other venues.

But the Covid pass is a document that allows people to gain entry to a venue by showing either that they have been fully vaccinated, or that they have had a recent negative test. When asked if it was still the government’s position that proof of a negative test would not be enough to secure entry to a nightclub from the end of September, the spokesman just said there had been no change to the plans for Covid passes and that the full plans would be set out in due course.

It’s worth recognising that this is a challenge that is seen in other European countries as well. There are published statistics on shortages in Europe currently.

And he confirmed that the government was opposed to putting HGV drivers on the government’s shortage occupation list, which would make it easier for firms to hire drivers from abroad. “We want to see employers make long-term investments in the UK domestic workforce, rather than relying on labour from abroad,” he said.

This is something that the government and NHS have significant expertise on. It’s not uncommon for there to be delays to flu vaccine supplies because of the way that the flu vaccines are made. And so manufacturers build headroom into their planning every year so the overall supply is maintained.

Leader of the House of Commons
(@CommonsLeader)

After the @FCDOGovUK statement, the Minister for COVID Vaccine Deployment @nadhimzahawi will make a statement updating MPs on Covid-19. pic.twitter.com/d6jlksj12I 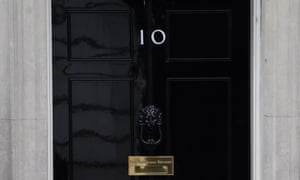 Yesterday it was reported that Boris Johnson may hold a cabinet reshuffle on Thursday. His diary has supposedly been kept clear for that day, and a reshuffle might overshadow the row he is expected to generate when he announces his social care plan, possibly tomorrow.

At the Downing Street lobby briefing, asked about these reports, the prime minister’s spokesman said there were “no plans for a reshuffle” this week. But he would not go as far as to say definitely that there would not be one.

It is not unusual for the government to say it has “no plans” for something only a short period before it actually happens, although if the spokesman had described the reports as “speculation”, reporters would be writing their reshuffle stories already.

Some Tories suspect the reshuffle talk is just a ploy to discourage ministers or MPs who may be tempted to criticise the plans to raise national insurance. This would not be the first time a reshuffle rumour had been used in this way as a party management tool.

It is also possible that Johnson (no stranger to indecision) has not decided yet. In politics it is helpful to be able to keep your options open, and he could wait until Wednesday afternoon before taking the final call.

I will post more from the lobby briefing shortly.