Rangers were penalized for a sloppy start to the second half

Steven Davis’ “big moment” has given Rangers “an important lifeline” on their way to the Champions League group stage despite losing to Malmo, manager Steven Gerrard said.

Davis rattled the ball home from the edge of the box in the 95th minute of a difficult night for the Scottish champions in Sweden.

Soren Rieks and Veljko Birmancevic met within two minutes of the restart to give Malmo the command.

It puts the Rangers in a stronger position for next Tuesday’s second leg at Ibrox, where they have an impressive record.

“It’s not where we wanted to be, but it’s way better than the 2-0. We were also on the verge of getting worse,” Gerrard told Rangers TV.

“We’re going to have to level up, individually and collectively, for next week. In my honest opinion there are six or seven who need to level up and level it up a lot.”

Cut off from Alfredo Morelos, Glen Kamara, Kemar Roofe and Leon Balogun – the last three due to suspension – the Rangers were still able to field a strong team as they began their campaign to reach the group stage for the first time in 10 years.

The Scottish champions came out ahead in the first half as Ryan Kent and Scott Arfield had chances but there were few goals on either end as both sides battled for control.

But Jon Dahl Tomasson’s Malmo came out of the locker room with a different face when they brought the Rangers to sword within two minutes of the referee’s whistle.

Birmancevic peeled off first and fooled Arfield before finding Rieks at the back post, with the Danish full-back firing a fantastic first volley from behind Allan McGregor.

And the seasoned goalkeeper was barely on his feet when Birmancevic rolled off his left post after James Tavernier gifted Anders Christiansen the ball that allowed the Danish midfielder to serve his striker.

The disastrous start of the second period left the Rangers baffled as Malmö swarmed around them – aided by loud home support – and Helander was fortunate enough not to admit a penalty that could have put Gerrard’s men in greater danger.

But soon the pace cooled and Rangers searched for an answer, but struggled to find a spark in the last third.

Scott Wright’s movement and pace seemed the most likely source of a goal, and he managed to serve Fashion Sakala, only the substitute’s attempt was blocked by a strong Malmo defense.

And that was the sum of the Rangers’ clear chances before Davis was given too much space on the edge of the box that allowed him to use all his experience to pool himself and hit the ball into the net.

Man of the Match – Veljko Birmancevic 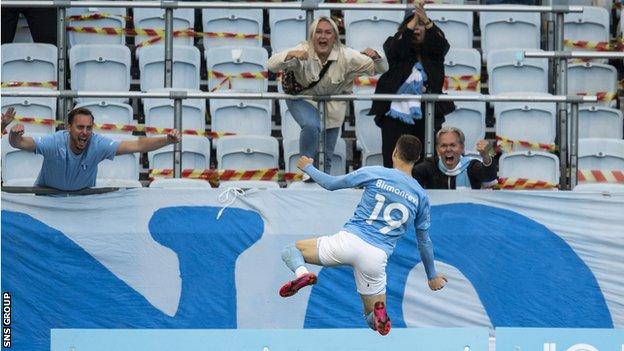 There were many candidates for Malmo, but Birmancevic won the goal and assist

What did we learn?

It’s a simple excuse – and one you probably won’t hear that Gerrard will make – but the Rangers looked like a team with just one competitive game under their belt, while Malmö looked like one in the middle of their season.

With their line-up in a 5-3-2 formation, the Swedish team caused a small surprise to which the Rangers found it difficult to adapt, as Helander and Barisic left space in the left channel in the first half.

Even so, the first 45 minutes went by without a clear chance, but the start of the second was a focus lesson as Malmö overpowered the Rangers to capitalize on their guests’ slow start.

The biggest upside for Gerrard will be the fact that his team eventually teamed up to get it back to a tie, and with more playing time in the return leg, he hopes their attacking game clicks better because their performance was abnormally poor.

Wright showed another strong performance and should start at Ibrox. Only Slavia Prague and Bayer Leverkusen have won in Govan in European competition since Gerrard took office, so they will bet on advancing despite the removal of the away goals rule.

Rangers manager Steven Gerrard: “We had two great performances. Filip Helander, who I thought was great, and Steven Davis.

“I’m running out of applause for Davo. He’s someone who won’t give up. He’s going to the end and he’s someone who delivered a really big moment, that gave us an important lifeline for the next week.”

The Rangers are at Dundee United’s Scottish Premiership on Saturday (12:30 p.m. BST) before attempting to close the 2-1 deficit against Malmö next Tuesday (8:00 p.m.).

B Leisure is adjusting occasion schedules in downtown Gainesville; Tradition Council does not say sufficient