Crystal Ellington, a Black Army veteran, says she was disciplined for returning to base late after a flight delay, while white service members were given a pass for tardiness. 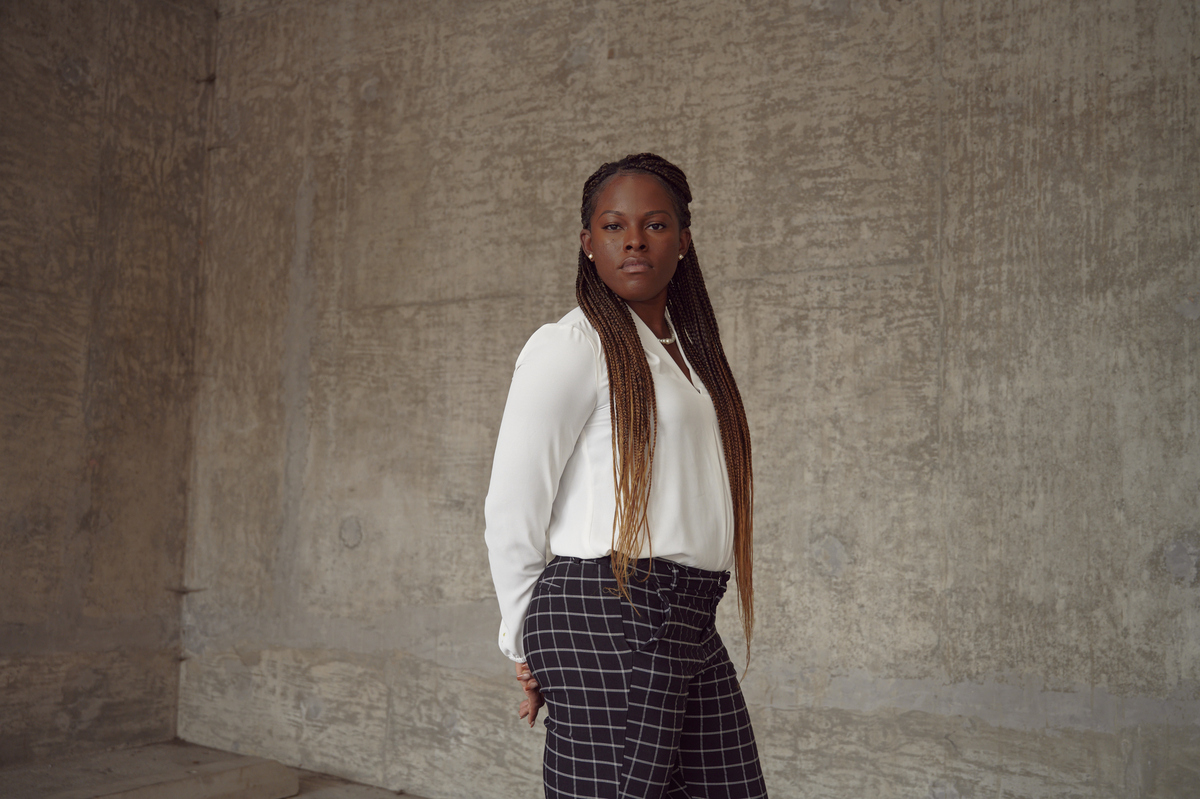 Crystal Ellington, a Black Army veteran, says she was disciplined for returning to base late after a flight delay, while white service members were given a pass for tardiness.

If Army veteran Crystal Ellington had known about the disparity between white service members and service members of color in military discipline, the former special operations Black Hawk helicopter mechanic says she never would have enlisted.

Ellington, who is Black, received a medical retirement under honorable conditions in July, after spending four years stationed at Joint Base Lewis-McChord, which is located 20 minutes south of Tacoma, Wash. She recalls being treated differently than her white counterparts many times, but one instance stands out because it involved her family.

On Thanksgiving weekend in 2018, then-Spc. Ellington flew into Daytona Beach International Airport on authorized leave. Ellington fondly recalls her son Gary Jr., who was 2, bounding into her arms with a huge smile, just as he does every time mom comes to visit. Gary Jr. lives in Florida with his father, and the distance between the two meant visits were less frequent than Ellington would have liked.

The two enjoyed the holiday together and on Sunday, Ellington hopped on a plane headed back to the Pacific Northwest. She had a layover in Chicago, but a snowstorm delayed the redeye flight that would’ve returned her to base early Monday morning — just when her superiors expected her back.

Ellington was delayed by six hours, but still managed to get back to base later that Monday. Upon her return, “almost instantly,” she says, she received an Article 15, a nonjudicial punishment for lower-level offenses. She was charged with being absent without leave.

In an Article 15 proceeding a commander adjudicates charges and decides punishment. In Ellington’s case, her superiors, all of whom were white men, assigned her extra duty manual labor. As Ellington swept, mopped, painted the command hallway, took out trash and mowed lawns around base, she couldn’t help but feel that the entire ordeal was unfair. She recalls that only some service members who returned to base late faced repercussions. Those who got away with it were always white. Ellington calls this disparity an overt pattern, “a situation that was well known, a situation that was not hidden, but nothing was being done about it.”

Data show that Ellington’s experience with unequal punishment based on race is a problem across the armed forces. A 2019 Government Accountability Office report found that even when controlling for factors like rank and education, Black and Hispanic service members across the armed forces are more likely than white service members to be investigated, receive nonjudicial punishments such as an Article 15 or be court-martialed for alleged violations of the Uniform Code of Military Justice. Veterans and military experts say that racial bias in military discipline has become a serious threat to national security.

Jason Lyall, author of Divided Armies: Inequality and Battlefield Performance in Modern War, says that mistrust stemming from racial bias can be devastating to a unit on the battlefield. 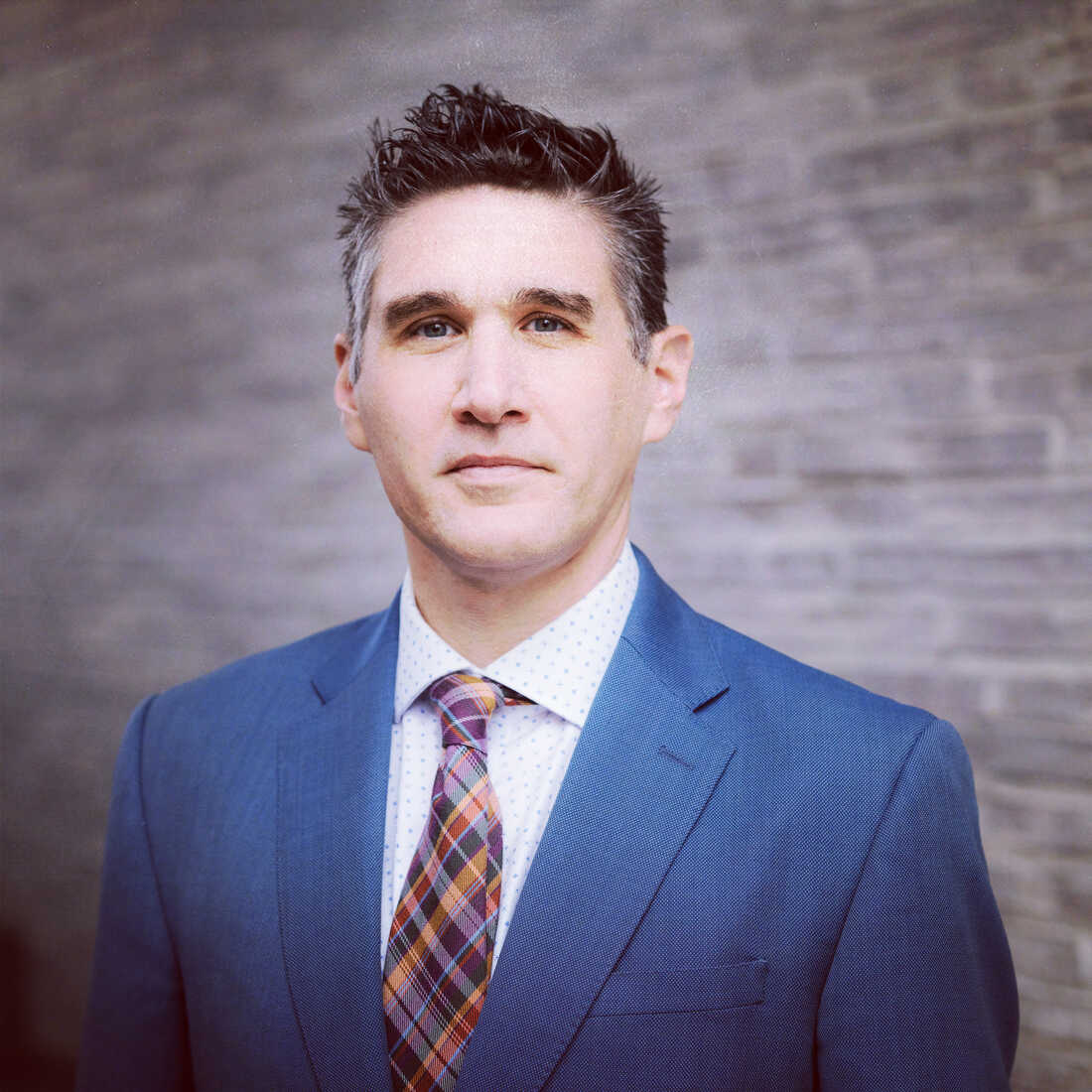 “If there’s anything that we know from studies of war, it’s that cohesion matters incredibly,” he says. “For war, you need to be able to have these soldiers trust each other, form bonds, share information with each other so they can react to surprises on the battlefield. If you have differential levels of trust based on group identity, information flows more slowly. Trust breaks down, orders are not fulfilled.”

Army veteran and chair of the Black Veterans Empowerment Council Victor LaGroon, who is Black, says seeing the disparate treatment of a soldier of color early in his military career put him on guard, even in his own unit.

After basic training and advanced individual training, LaGroon was at Fort Polk in Vernon Parish, La. in 2004 when he witnessed a white superior discipline a Latino soldier for being late. A white soldier showed up even more tardy, and received no punishment. LaGroon says that after the incident, other soldiers discussed what they had witnessed and concluded that the junior white soldier was not disciplined because both he and their superior were white.

LaGroon says that early exposure to inequality left a lasting impact on his next two years in the Army before he medically retired in 2006. He says the initial incident made him cautious to avoid situations where he could be subjected to a superior’s biased perception of him because it could have cost him his security clearance and his career. When working with a superior who has a reputation of applying unequal discipline, LaGroon says that soldiers are left to question, “How fair are you? How biased are you? How much can I trust you?” 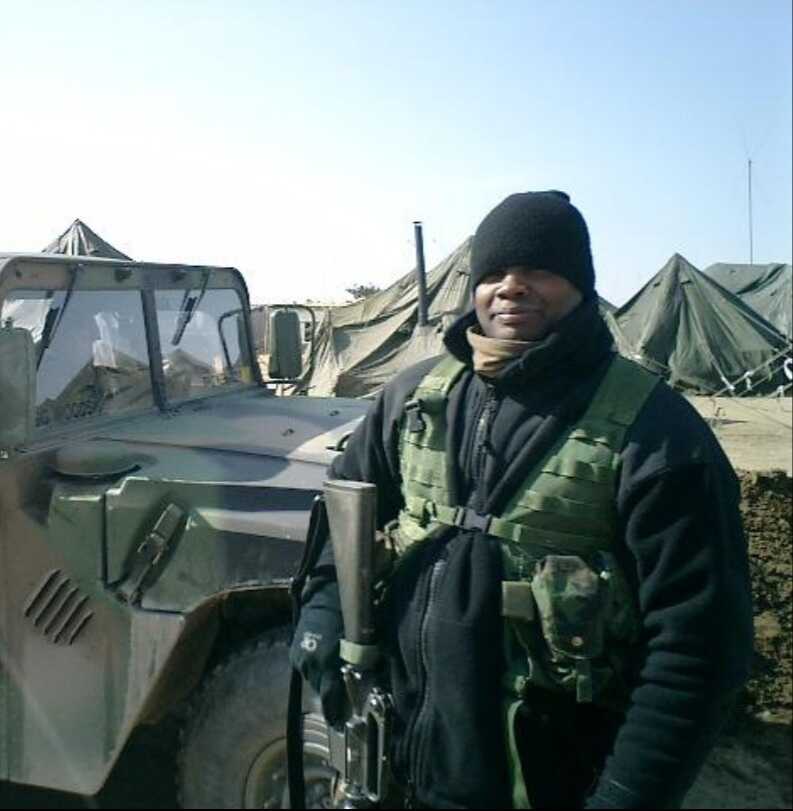 Victor LaGroon is a Black Army veteran and chair of the Black Veterans Empowerment Council. Early exposure in his military career to inequality left a lasting impact on him.

For Ellington, the answer to these questions was no, she could not trust her superiors. She says that those who knew about her approved trip did not stand up for her. As a result, she recalls, “I felt not only alone, but I felt betrayed.”

Lyall, who is an associate professor of government and the James Wright Chair in Transnational Studies at Dartmouth College, says that the degradation of trust makes racial bias a national security issue because future wars will be decentralized. Seamless communication will be essential to keeping combat effectiveness high and casualties low. If individuals don’t trust the group or if commanders don’t trust certain subordinates, “you become slow, you become predictable, you become vulnerable,” Lyall says. “And those kinds of units take more casualties on the battlefield.”

Retired Air Force Col. Don Christensen served over 23 years as a prosecutor, defense counsel, military judge and finally, chief prosecutor of the Air Force. He is now the president of Protect Our Defenders, a military reform advocacy organization that works to combat sexual assault and racism in the military. Christensen is adamant that addressing the problem of racial bias in military discipline is more than just a moral imperative: it’s about keeping the ranks filled. 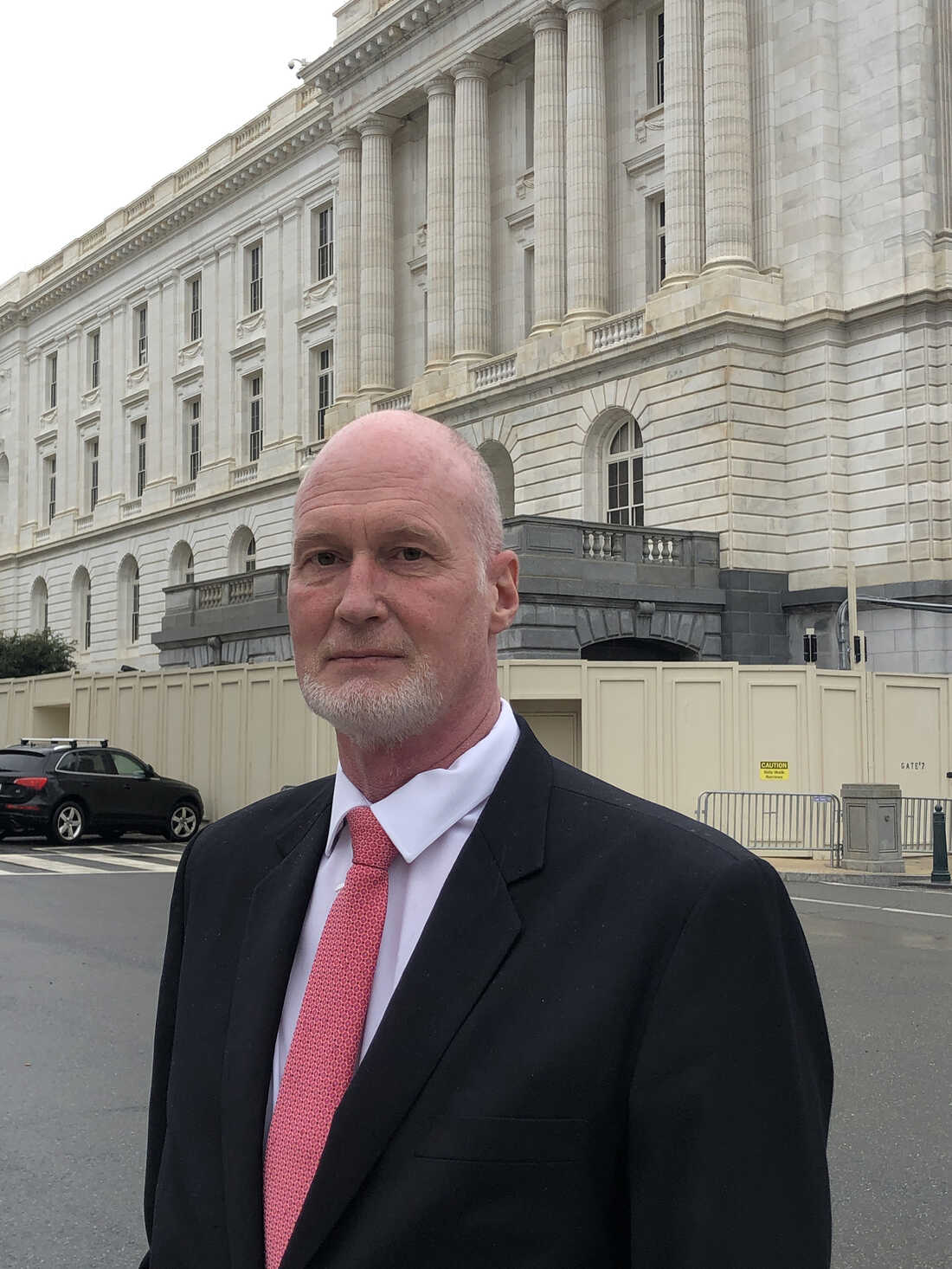 Retired Air Force Col. Don Christensen is the president of Protect Our Defenders, a military reform advocacy organization that works to combat sexual assault and racism in the military.

“Number one, just as a country, especially in the military, we should be concerned about what’s right. Here, right matters,” he says. “Second thing is, we cannot operate our military without service members of color being willing and able to come in and serve.”

According to a 2019 Defense Department demographics report, about 413,000 active duty service members are people of color. And over the next decade, the U.S. Army will move toward becoming a majority-minority army, according to Lyall.

Ellington says that “when civilians find out about these things that are happening, the sexual harassment and the racial discrimination, it makes folks think twice about joining the military, where essentially you’re taught that you’re a soldier first and that people don’t see color and you’re part of a brotherhood — and that’s not the case.”

The prospect of being treated differently because of race while serving is an addition to the growing challenges military recruiters are facing. Over 70% of young Americans are not eligible to serve — mostly for physical fitness reasons — and there is an increasing social divide between veterans and Americans who have never served.

LaGroon says that the military has never been particularly good at being introspective.

“Unfortunately for many, it’s almost sacrilegious within our community to judge the military community,” LaGroon says. “It’s almost like we’re above reproach because we’re the good guys. And it’s not that we’re not the good guys, but even the good guys have to be held to a standard, right?”

When I first introduced the #MJIIPA in 2013, I started keeping a whip list on a giant whiteboard as a giant reminder of the work needed to pass the bill.

Today, we finally hit over 60 co-sponsors.

Justice for survivors of military sexual assault is finally within reach. pic.twitter.com/NSP6r0ZIor

Recent efforts at reform suggest that this culture may be starting to change. In July, the Senate Armed Services Committee approved the 2022 National Defense Authorization Act, which included Democratic Sen. Kirsten Gillibrand’s Military Justice Improvement and Increasing Prevention Act. The measure would transform the military justice system by moving the decision to prosecute serious criminal cases out of the hands of commanders and into the hands of trained JAG Corps military lawyers. Commanders, most of whom have little if any legal training, currently make the decision whether to refer serious crimes to the JAG Corps for court-martial.

Christensen says that transferring the decision to prosecute to military lawyers will eliminate the “bias of knowledge.” When an officer has to make disciplinary decisions, the retired Air Force lawyer says that “the white officer who has a relationship and a familiarity with the white enlisted guy who got in trouble is more likely to give him the benefit of the doubt than to the young Black kid that they don’t know very well, and they might have those preconceived notions about, you know, young Black kids from Chicago.”

Other recent efforts to address racial bias in the military have stemmed from the national zeitgeist. George Floyd’s murder and the ensuing national reckoning around race prompted one Air Force general to release a heartfelt video message about “living in two worlds.” Among other thoughts, he shared instances where he was the only Black person in a room or was treated differently by peers in the military because of his race. And the Navy established Task Force One Navy to examine racial bias in the sea-based branch and hold focus groups for enlisted sailors and officers to share their experiences.

The Jan. 6 insurrection at the Capitol sparked its own series of tough talks. One month after the attack, Defense Secretary Lloyd Austin, the first Black defense secretary, signed a memo giving commanders and supervisors 60 days to implement a one-day stand-down where they were to remind personnel of their oath of office, describe “impermissible behaviors” and explain how “suspected, or actual, extremist behaviors” can be reported.

“Without inclusion, you don’t get the advantages of diversity”

Lyall says that the missing link preventing the military from realizing necessary progress is inclusion. 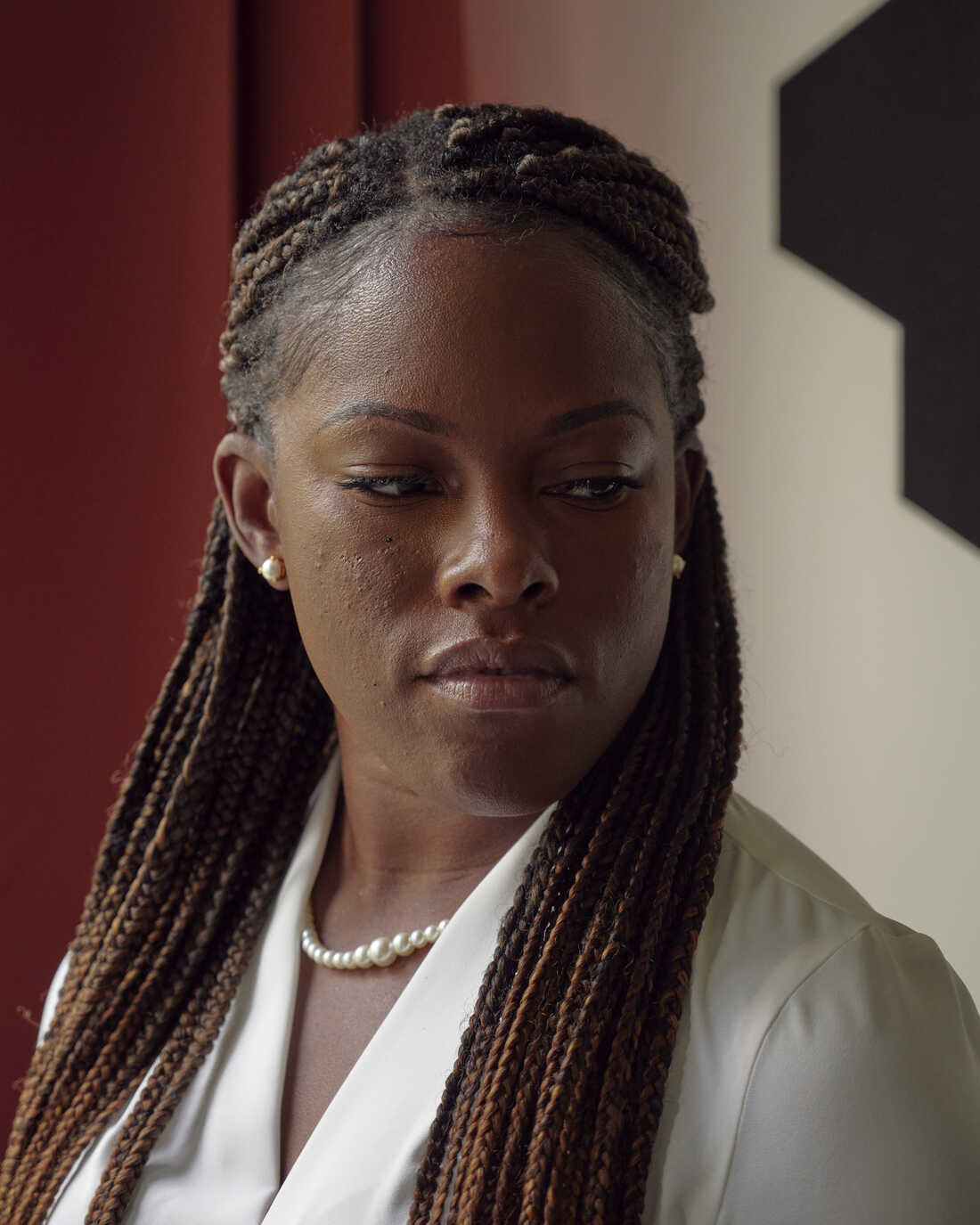 LaGroon insists that for change to occur, tough conversations and active inclusion must be a team effort.

“Putting on that uniform gives us some privileges,” he says, “but it gives us an enormous responsibility, and most of that responsibility is to one another.”

Daniel Lam is an intern on NPR’s National Desk.