Protesters take cover next to burning tires near the fence of the Gaza Strip’s border with Israel during a protest east of Khan Younis in the southern Gaza Strip on Wednesday. Abdel Kareem Hana / AP Hide caption 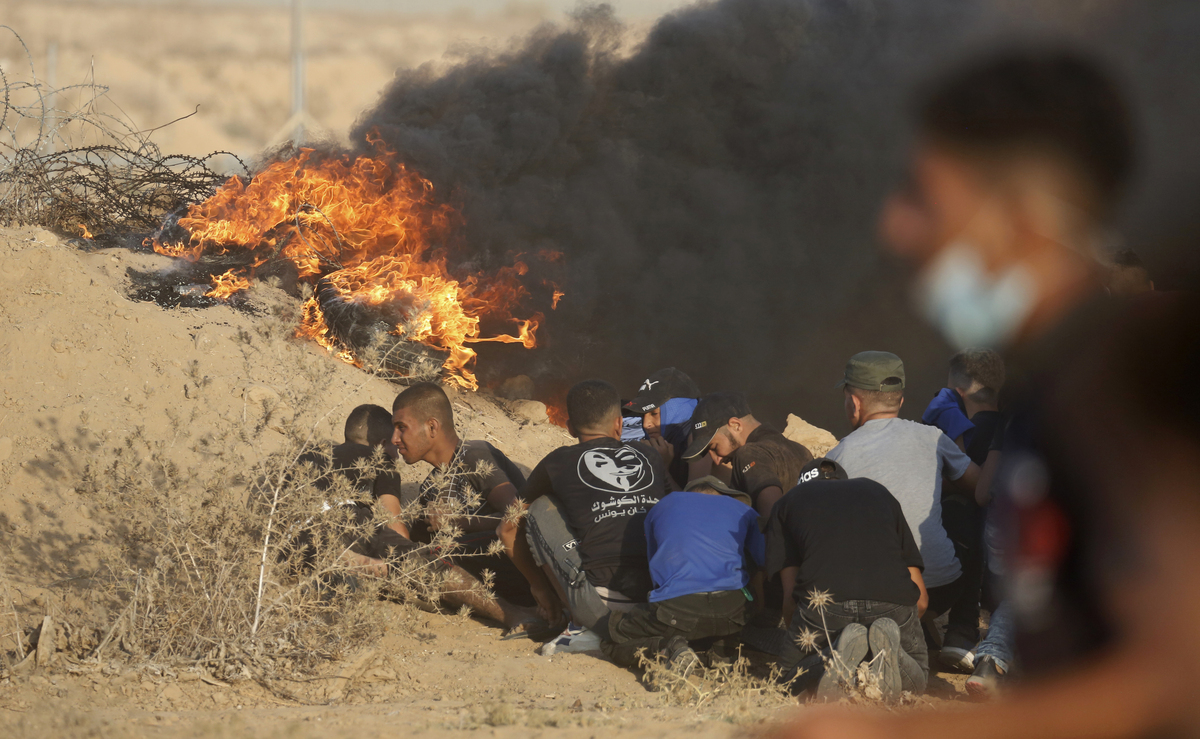 Protesters take cover next to burning tires near the fence of the Gaza Strip’s border with Israel during a protest east of Khan Younis in the southern Gaza Strip on Wednesday.

GAZA CITY, Gaza Strip – Hundreds of Hamas-backed activists launched what they believed to be the first of a series of nighttime protests along the Israeli border on Saturday, throwing explosives at Israeli forces, which responded with keen fire.

Organizers said the rallies, which are set to continue throughout the week, should increase pressure on Israel to ease a crippling economic blockade in the Gaza Strip.

“The occupation will not find peace until the siege of our beloved country is lifted,” said Abu Omar, a spokesman for the demonstrators.

Israel and Egypt have maintained the blockade since Hamas, a group that swore to destroy Israel, took control of Gaza in 2007, a year after winning the Palestinian elections.

The blockade, which restricts the movement of goods and people in and out of Gaza, has devastated the territory’s economy. Israel has tightened the closure since an 11-day war in May, demanding the return of the remains of two dead soldiers and the freedom of two Israeli civilians believed to be in Hamas detention.

Amateur footage and photos from the Gaza Strip showed hundreds of Palestinian protesters participating in Saturday’s gathering. Some appeared to be throwing explosives and singing at celebrations when explosions rang out.

The Israeli military said the troops responded to the explosives by firing sharp shots at the protesters. There were no injuries on the Israeli side, it said.

Israeli fire injured three demonstrators, according to health authorities in the Gaza Strip.

Recent similar protests have been fatal

Another Palestinian man identified as a member of the Hamas military wing was also killed in the protest while a protester shot an Israeli soldier in the head at close range. The soldier remains in critical condition.

Activists affiliated with Hamas also launched a series of fire balloons from Gaza on Saturday afternoon, which, according to the Israeli fire service, ignited two fires in southern Israel.

Israel and Hamas are bitter enemies who have waged four wars and numerous skirmishes since 2007. Israel says the shutdown is necessary to prevent Hamas from collecting weapons, while critics say the blockade amounts to collective punishment.

Egypt has tried to broker a longer-term ceasefire that would ease the blockade and appeared to be making progress last week when it pressured Hamas on Wednesday to hold back a border protest.

The following day, Israel said it was easing some of the commercial restrictions on Gaza and allowing vehicles, goods and equipment for reconstruction projects to enter the Palestinian enclave. Israel said the easing could stretch further if things stay calm.

The Israeli government reached an agreement with Qatar on August 19 that would allow the Gulf country to resume aid to families in Gaza in an effort to ease tensions with Hamas. Israel suspended aid payments in May, saying it was necessary to ensure Hamas did not benefit from cash injections.

At least 260 Palestinians were killed during the Gaza-Israel war in May, including 67 children and 39 women, according to the Gaza Ministry of Health. Hamas has admitted the deaths of 80 militants. Twelve civilians, including two children, were killed along with a soldier in Israel.